Palm Sunday: Beginning of the week that changed the world

When Jesus and his disciples drew near to Jerusalem,
to Bethphage and Bethany at the Mount of Olives,
he sent two of his disciples and said to them,
“Go into the village opposite you,
and immediately on entering it,
you will find a colt tethered on which no one has ever sat.
Untie it and bring it here.
If anyone should say to you,
‘Why are you doing this?’ reply,
‘The Master has need of it
and will send it back here at once.’”
So they went off
and found a colt tethered at a gate outside on the street,
and they untied it.
Some of the bystanders said to them,
“What are you doing, untying the colt?”
They answered them just as Jesus had told them to,
and they permitted them to do it.
So they brought the colt to Jesus
and put their cloaks over it.
And he sat on it.
Many people spread their cloaks on the road,
and others spread leafy branches
that they had cut from the fields.
Those preceding him as well as those following kept crying out:
“Hosanna!
Blessed is he who comes in the name of the Lord!
Blessed is the kingdom of our father David that is to come!
Hosanna in the highest!”

Today is Palm Sunday, the beginning of the holiest week in Christianity.

It is the week that changed the world.

The week in which the Son of God, who chose to become incarnate was a human so that He would be sacrificed, tortured horribly, nailed to a cross and left to die. All in atonement for the shattering, cataclysmic sin of grandiosity of our first parents, who chose to defy God’s explicit command because they thought themselves to be “like God” who could determine for themselves “what is good and what is evil” (Genesis 3:5), despite the fact that Adam and Eve already knew the answer to that question. As the Book of Jeremiah 31:33 says, when God created humans, He placed His law within each of us, written on our very hearts. Another way to say wanting to be their own God is “Do as thou wilt” — the satanic motto and zeitgeist of our corrupt time.

That first sin by our first parents left a birth stain on their children and every human who followed. It is the Original Sin of concupiscence that renders us into fomes peccati (tinder for sin), born with an appetite and inclination toward evil. And so, that first sin in that first garden opened the gates to the TIDAL WAVE of all the subsequent sins of humanity.

Wrongs require restitution — reparation made by giving an equivalent as compensation for loss, damage, or injury caused. So immense were the sin of our first parents and the sins of all humanity that no human could make amends. Only God Himself, in the person of the Son, could make that restitution. As St. Paul said in 2 Corinthians 5:21:

For our sake he made him to be sin who knew no sin, so that in him we might become the righteousness of God. 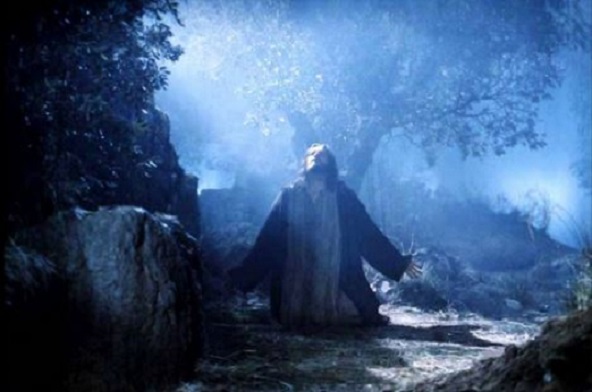 Our sins are so horrific that, while praying in the Garden of Gethsemane before the Roman soldiers came, Jesus actually sweated blood from seeing the immensity of evil for which He would atone — every sin of humanity, past, present and future, from the first to the last. As it was foretold in Isaiah 53:5:

But he was pierced for our transgressions,
he was crushed for our iniquities;
the punishment that brought us peace was on him,
and by his wounds we are healed.

That’s how much He loves us narcissistic, selfish, ever-bickering, ever-warring, utterly wretched, and downright murderous humans.

For many Christians, this Palm Sunday — and Easter, too — is particularly difficult because some churches are still closed due to local-state governments’  arbitrary and draconian COVID-19 policy. But we can offer our distress and difficulties to our Lord, as a special Lent penance.

And if you are so fortunate that your church isn’t closed today, you will receive a long piece of palm leaf. This video gives very easy-to-follow instructions on how you can make a cross from your palm.

And remember to tell Him “Thank you” and that you love Him with your whole heart, your whole soul, your whole mind, and with all your strength.

May the peace and love of Our Lord, Jesus Christ be with you,

This is especially relevant to me, as I’m working toward becoming suitable, religiously, to actually become as Religious as my future Wife is. I’ve been a sinner for so long I’m honestly not sure I can leave “that life” behind, but sure intend to try. I’ll soon have a Wife and 3 year old Son to be responsible for.

I am so happy for and proud of you, James/truck. 🙂

To James, stand on the Lord’s promises and lean not on your own understanding.

Matthew 11:28-30
28 “Come to me, all you who are weary and burdened, and I will give you rest. 29 Take my yoke upon you and learn from me, for I am gentle and humble in heart, and you will find rest for your souls. 30 For my yoke is easy and my burden is light.”

God Bless you and trust in the Lord and begin your walk with him.

Thank you Dr.E for this most memorable and incredible post. Jesus has oceans of mercy to give to humankind – they must come to Him and ask Him for help. We can never ever conceive of the evil Jesus saw that He was to carry and hold onto through the terror of His Passion; He sweat blood because he was so terrified. I think all of us should meditate upon this as much as humanly possible, so that we absorb to some extent the depth of God’s love for us, and thank Our Lord for His love and mercy continually.

In one week, Our Lord was hailed as a King, was crucified and rose from the dead.

We are living in the Age of Evil Rising, but Christ the Logos is also rising. Our Lord vanquished Evil once, and He will do so again. Jesus is NOT asleep at the switch (or the boat), He remains in control, and He will Conquer in the End.

These times seem as if they are the End Times. They may be. Tremendous persecution has been building against Christ’s followers around the world for some time now. It will happen here. Our Lord is looking for witnesses, and persecution will find and test them.

Truly, the war is a spiritual war, and God is controlling history.