If you’re using a Seresto flea collar for your dog or cat, REMOVE IT IMMEDIATELY! 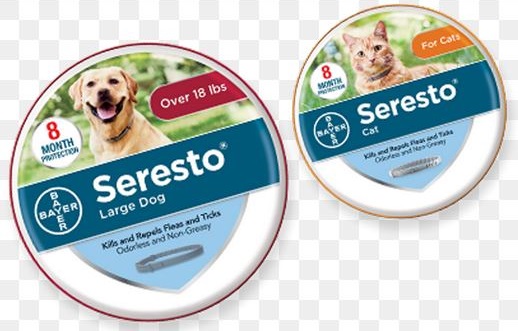 Johnathan Hettinger reports for USA Today, March 2, 2012, that according to U.S. Environmental Protection Agency (EPA) documents, Seresto, one of the most popular flea and tick collars, has been linked to hundreds of pet deaths, tens of thousands of injured animals and hundreds of harmed humans.

But the EPA has done nothing to inform the public of the risks.

Seresto, developed by Bayer and now sold by Elanco, works by releasing small amounts of pesticide onto the animal for months at a time. The pesticide is supposed to kill fleas, ticks and other pests but be safe for cats and dogs.

But thousands of pets are being harmed, according to federal documents obtained by the non-profit Center for Biological Diversity through a public records request. The center then provided the documents to the Midwest Center for Investigative Reporting.

Since Seresto flea and tick collars were introduced in 2012, the EPA has received incident reports of at least 1,698 related pet deaths. Overall, through June 2020, the agency has received more than 75,000 incident reports related to the collars, including nearly 1,000 involving human harm.

I use Comfortis flea tablet for my cats. My vet told me that the pill is safe for pets because it is not designed for mammals (like dogs and cats), but specifically targets insects like fleas.

One pill is good for an entire month. Cats are notorious for being difficult to pill. What I do is crush the pill into powder, mix the powder with a syringe-full of yummy chicken broth, then squirt the liquid into the cat’s mouth.

I called my vet re the Seresto collar. If you bought your collar from your vet, you are OK. The collars being recalled are being sold at retail outlets. Vet also said that these collars can be counterfeit and are probably the collars causing the injury.

Thank you Dr.E for this important post. This is terrible!

What a blessing to have this information. Thank you.

After reading about the Seresto collars here, coincidentally, just yesterday a coupon came in the mail from Pet Supplies Plus advertising Seresto Flea & Tick collars.

Here is an article published 5 days ago about precautions Amazon is taking as a result of the warnings about the collars.

Though it is comforting to read the statement from the Alleghany veterinary professionals, it’s also important to gather as much information as possible.

That being said, though the first report emerged about the collars in 2012, according to this recent article, the EPA is trying to place the blame on….you guessed it! PRESIDENT TRUMP!!!

It shouldn’t be up to a vet hospital to defend Seresto. Why isn’t Seresto defending its flea collars?

As a pet owner, I will simply not take the risk with Seresto, especially since there are alternatives to flea collars, including waterless flea baths, the liquid squeezed onto the nape of a cat’s neck, and anti-flea tablets like Comfortin which I highly recommend.