God did not make death,
nor does he rejoice in the destruction of the living. […]
For God formed man to be imperishable;
the image of his own nature he made him.
But by the envy of the devil, death entered the world,
and they who belong to his company experience it. 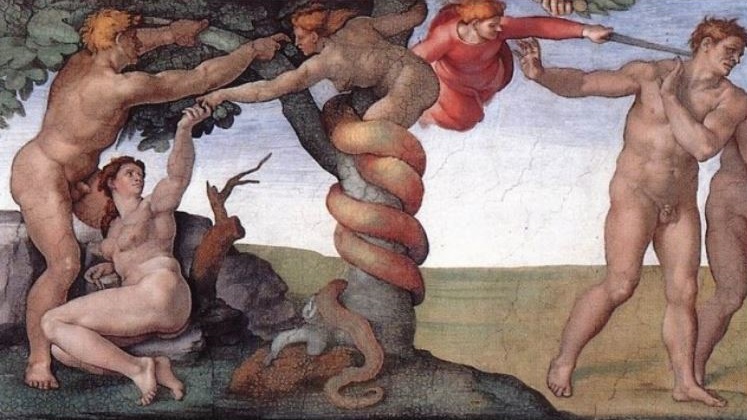 When Jesus had crossed again in the boat
to the other side,
a large crowd gathered around him, and he stayed close to the sea.
One of the synagogue officials, named Jairus, came forward.
Seeing him he fell at his feet and pleaded earnestly with him, saying,
“My daughter is at the point of death.
Please, come lay your hands on her
that she may get well and live.” […]
While he was still speaking,
people from the synagogue official’s house arrived and said,
“Your daughter has died; why trouble the teacher any longer?”
Disregarding the message that was reported,
Jesus said to the synagogue official,
“Do not be afraid; just have faith.”
He did not allow anyone to accompany him inside
except Peter, James, and John, the brother of James.
When they arrived at the house of the synagogue official,
he caught sight of a commotion,
people weeping and wailing loudly.
So he went in and said to them,
“Why this commotion and weeping?
The child is not dead but asleep.”
And they ridiculed him.
Then he put them all out.
He took along the child’s father and mother
and those who were with him
and entered the room where the child was.
He took the child by the hand and said to her, “Talitha koum,”
which means, “Little girl, I say to you, arise!”
The girl, a child of twelve, arose immediately and walked around.
At that they were utterly astounded.

That first sin by our first parents in the garden was so cataclysmic that it fundamentally changed the natural order of the world: A door was opened to chaos; henceforth a price must be paid for being human. Where once was joy and ease, there would be banishment, toil, pain, hardship, sickness, disease, and eventual death — “for dust you are and to dust you will return”.

But as Wisdom 1:13 reminds us, “God did not make death, nor does he rejoice in the destruction of the living.” Through the sacrifice of the Second Person of the Triune Godhead, we are promised that as His followers, we too will rise from the dead.

That promise is given vivid testimony in the accounts of Jesus raising not just Lazarus, but Jairus’ little daughter, from the dead.

So, on this glorious Sunday morning, rejoice!

Thank you Dr.E for this most beautiful and profound post. I find the Book of Wisdom’s citation particularly relevant and important, that those who keep company with the devil will be governed by envy. This “envy” is a trip to evil, to nowhere but death and destruction.

Jairus, the synagogue official, took great risk to ask for Jesus’ help, given his position, but he was told by Jesus to have faith and he did, for his lovely daughter was raised back to life by Jesus. One can only imagine what a joyous occasion this was for Jairus and his family, and for everyone who was there. I think it was so tender of Jesus to tell Jairus to give her something to eat. How wonderful!