There does seem to be karma for certain, not all, obnoxious, insufferable people on the Left.

In May 2021, another “television personality” Courtney Stodden said that in 2011, during her marriage to her much older busband Doug Hutchison, Teigen tweeted and privately messaged the couple urging them to take their own life. Teigen apologized to Stodden, blaming her behavior on her past, insecure, attention-seeking self. A month later, Teigen released another apology for taunting and cyberbullying fashion designer Michael Costello and “television personality” Farrah Abraham. 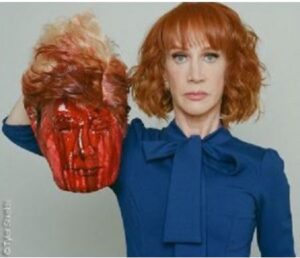 Then, it was so-called comedienne Kathy Griffin — she who held up a mockup of President Trump’s severed head.

In August 2021, Griffin announced that she had been diagnosed with lung cancer. That same month, she underwent surgery to have half of her left lung removed.

On October 21, 2021, on the movie set of “Rust” in Santa Fe, New Mexico, Baldwin was rehearsing for a scene and fired a so-called prop gun, which turned out to be a real gun with real bullets, killing cinematographer Halyna Hutchins and wounding director Joel Souza. According to gun safety rules, Baldwin should have checked the gun himself, instead of rely on the assistant director Dave Halls declaring that the gun was “cold”. Halls has subsequently admitted in an affidavit that he had not thoroughly checked the gun he handed to Baldwin.

Baldwin was not just an actor in the movie, he was also a producer and, therefore, was responsible for safety and working conditions. Just hours before the fatal shooting, seven union crew members, who had protested against unsafe working conditions, were told to leave the set, with a producer threatening to call the police if they did not leave. The seven were replaced by non-union members.

We also now know that there was plenty of live ammunition on the movie set, and that crew members had been target shooting with real bullets and real guns, including the gun later fired by Baldwin. 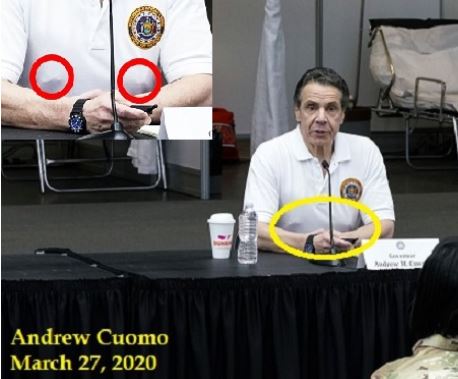 The latest is Andrew “nipple rings” Cuomo, 63, whom media whores had lavishly praised for his disastrous handling of COVID-9.

Last August, Cuomo reluctantly resigned from being governor of New York after 10½ years in office. He resigned only after a five-month independent investigation concluded that Cuomo had engaged in conduct that violated federal and state laws — that of sexually harassing 11 women, 9 of whom were current or former state workers.

NewsMax reports that today, October 28,2021, Cuomo was charged with a misdemeanor sex crime.

The complaint, filed in a court in Albany, the state’s capital, states that “At the aforesaid date time and location the defendant Andrew M. Cuomo did intentionally, and for no legitimate purpose, forcibly place his hand under the blouse shirt of the victim [redacted] and into her intimate body part. Specifically, the victims (sic) left breast for the purposes of degrading and gratifying his sexual desires….”

Cuomo is expected to be arrested next week, the New York Post reported.

Sorry-I have ZERO sympathy for these people. They deserve what they’re getting,and Baldwin,espcially,should be treated
JUST like any of us Normal People would if WE were in those shoes.HE was supposed to be the Responsible Adult there,and He was the one who should have checked that gun before even TOUCHING that trigger.Furthermore,I can’t imaging he didn’t know that you NEVER point a gun at anything you don’t intend to destroy,not even a TOY gun. My Brother,Dutch taught ALL his children gun safety starting when they wer barely big enough to carry a gun to him. By the age of 10,they knew and complied with gun safety rules,by 12 they could all shoot well enough to stop an intruder if the rest of the family wasn’t near. I’d have thought an Adult,with THAT much responsibility to handle,would be at LEAST as well trained on guns as a 12 year old.

Sorry-I have ZERO sympathy for these people. They deserve what they’re getting,and Baldwin, especially, should be treated JUST like any of us Normal People would if WE were in those shoes. HE was supposed to be the Responsible Adult there, and HE was the one who should have checked that gun before even TOUCHING that trigger. Furthermore, I can’t imagine he didn’t know that you NEVER point a gun at anything you don’t intend to destroy, not even a TOY gun. My Brother, Dutch taught ALL his children gun safety starting when they were barely big enough to carry a gun to him. By the age of 10, they knew and complied with gun safety rules at least as well as most Firearm Instructors, by 12 they could all shoot well enough to stop an intruder if the rest of the family wasn’t near. I’d have thought an Adult, with THAT much responsibility to handle,would be at LEAST as well trained on guns as a 12 year old. And WHAT was he thinking even HAVING live ammunition on the set, knowing how easily something like-well,THIS could happen! This was NOT just a mistake – his whole operation had put together multiple components to make this possible.

“The Swamp” is deep & all- encompassing, far beyond the borders of the D. C. beltway. “The Swamp” oozes into brain matter & social structures & tiered income levels, to the point that there is an “elite & untouchable (as they believe) far left where “nothing can go wrong b/c I am in charge” ……) So sorry that sometimes, people pay w/their lives for this leftist snobbery. This is gonna be curious to watch how they pass this “hot potato” of blame around the employees at this tragic set. If people step up and accept blame, this will be over in a little while, but if not—this will drag on for years until the NEXT time this happens……or beyond.

Some one in The Sysyem has it out for Cuomo, according to internet rumors.
You really think the Soros-appointed and Trump-hating NY AG would go after one of their own if there wasn’t an order to do so? Dems aren’t bothered by a groping incident.
Cuomo’s got $18M in his campaign coffers. He no doubt has dirt on folk. And no doubt he ticked off the wrong person. The System wants to destroy the value of that $18M.

True. But it’s still great that Cuomo is gone! 😁

Maybe the elites on the Left are going stealth mode by getting rid of the most loud-mouthed among them.

Yep, however they want to take out one of their own is fine by me!

Now, that’s a thought! I’ve also been wondering why “The Squad” hasn’t been hogging the TV cameras much of late. Alexandria Occasional Cortex surfaces with an illiterate pronouncement now and then, but what of the 4 Musketeers wailing and tongue-lashing us stupid citizenry over BLM, energy footprints, cows farting, not being politically correct on ANYTHING from LGBTXYZ to the “new-speak” of pronouns, paying our fair share, not to forget bawling at the holding “cells” of human suffering at the border (the Trump border, not the Biden border). For a while now, I’ve been thinking that Pelosi and other Dems have told the Squad to” knock it off” while Biden’s polls are bottoming out and elections are nigh.

Agree. But notice that they are making a big deal out of complaints of his groping, complaints conveniently shelved until needed. What is ignored is his killing of nursing home residents, along with Wolfe and “Rachel” Levine in PA. Murdering old folks is not as important as the groping of lefty women who had to have known of his proclivities, but chose to work for him, figuring they could handle him, or possibly parlay the grope into some kind of advancement, ala Kamala.

He gets to take the lesser sex crime (which is horrific enough as it is ) and they blow it all up on media but its smoke and mirrors to cover up all the deaths he caused with the covid which I think would should be considered murder of senior citizens on a grand scale. How long do we think he will stay in prison if he even gets there but Murder would tack on many more yrs.

Let them have their karma. Problem is, they screw up, we suffer! At least with politicians.
Let’s lock them all in a cage with each other!

Oh, so I see….like maybe a gladiatorial event? Republican v Democrat? Can the Independents stand aside with lancers ready to spear as we go…ready to decide the outcome, according to the winds at the moment…as they do? And, then, occasionally, we get the “independent-elected” middle-of-the-road asshat, like Joe Biden, of whom no one expected “anything much…so he’d be “OK” & not damaging, ” but instead we got THE WORKS shoved up in our faces…from which it will take another decade to recover IF we elect a NON socialist, U.S. Constitutionalist, REAL executive?

I can hardly wait to see how this side show plays out. Maybe since the perpetrators are liberals–they will just get a slap on the hands. I am not expecting jail time, but then perhaps I will be surprised.