Study after study by various institutions had told us LGBTs (lesbians, gays, bisexuals, transgenders) account for at most 3% of the U.S. population.

But that percentage is increasing as the Left relentlessly advance their civilization-destroying agenda. 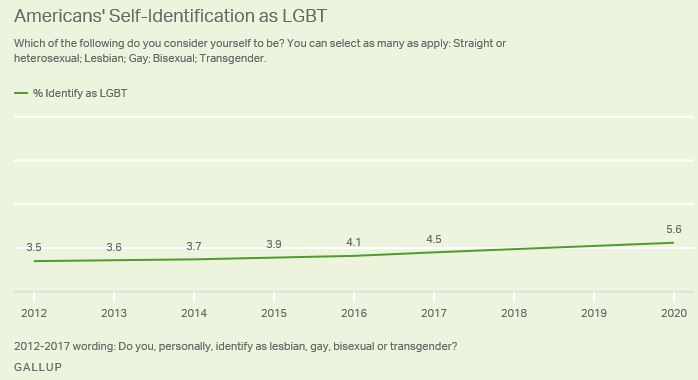 But that is nothing when it comes to America’s youth.

A new study, New Insights into the Generation of Growing Influence: Millennials In America, by George Barna, who leads research at Arizona Christian University’s Cultural Research Center, found that some 30% of millennials, including nearly 40% of adults 18-24, identify as “LGBTQ” — three times the proportion identified among older U.S. adults.

How can this be?

How can our sexual identity and preference be so malleable?

The Barna report describes U.S. millennials as a generation that is troubled and searching for answers to their problems, while “disengaged from spiritual teaching and practice, resulting in a paucity of knowledge, understanding, experience, and growth in this realm.” Barna said:

“The resultant spiritual illiteracy virtually resigns them to a superficial worldview in which they grasp at ideas and practices that provide immediate comfort rather than lasting truth and peace. The moral chaos that characterizes the generation can likewise be traced to a dearth of coherent and pragmatic religious instruction abetted by the absence of mature moral reflection.

The widespread confusion among young adults regarding aspects of their identity — spiritual, sexual, and also related to their sense of purpose in life — are a direct outgrowth of that spiritual wisdom vacuum. It seems that often young adults fill the void by creating a self-image that is built upon self-centeredness, self-reliance, and independence. That may be perceived as arrogance, but as much as anything it may also be a defense mechanism covering up their personal deficits with which they wrestle.

Your worldview is the foundation of your decision-making. Every choice you make emerges from your worldview, which serves as the filter through which you experience, observe, imagine, interpret, and respond to reality. And every one of the thousands of choices you make every day have consequences. That means worldview is at the heart of everything we are considering in relation to the well-being and development of the young adult generation.

Given the centrality of worldview to the human experience, there can be no improvements to the life millennials lead without addressing the fundamental role of worldview. And because worldview is developed and carried out in the competitive marketplace of beliefs and behaviors, think about the pervasive consequences for millennials of rejecting the biblical worldview in favor of other, more popular alternatives.”

This entry was posted in Christianity, The Left and tagged % of LGBT in U.S. population, % of LGBT millennials, Barna Report on millennials, millennials and Christianity. Bookmark the permalink.
5 1 vote
Article Rating
Subscribe
Login
11 Comments
Oldest
Newest Most Voted
Inline Feedbacks
View all comments

This is such a sad pronouncement on our country. So glad I will be getting out of here soon–the future does not look particularly bright if this is how lost these young folks are.

Gonna take a whole lot of Prayer to turn things around.

After I retired from programming, I got a job in retail in a big box store where for the first time I got to meet the public. I was shocked so many seniors said they were glad they wouldnt be around. I would tell them, “If you think your life is near an end, if you think at this point you are expendable, then you are worth gold. Because you can afford to spend your life to save a young person, for instance, lie to soldiers so a young person can escape, or jump in front of a tank” This was 2005, yet every time I made this argument, it turned them around and they went away happy. I was actually shocked. I had a dark view where the nation was going, but I never realized this was what was really worrying my fellow seniors too. And I do believe what I told them. I have to save myself and live as long as possible in case they need an expendable resource to save us. So do not be sad. Live your life knowing how valuable you are, and the Lord will not take you until your work is done.

You would think that we would progress in our humanity but seems we are right back to Caligula and the Roman sexual debauchery and death, they say were progressive or maybe regressive in sexual deviance look at all the lives being destroyed.

While I agree many millennials are confused, 40% is ridiculous. I bet the vast majority of the 40% probably know someone who is a homo/shemale/queer.

I’m inclined to think a majority of those who say they identify as LGBTQXYZ are actually just curious enough to maybe dabble in a form of it,just enough to see if it “grows on ’em”. I guess it’d be likened to people who SAY they’re Republicans,except for….(add your list of Democratic programs,free things,or social benefits they can’t give up…)

I’ve read these same studies. I can say that, as my general observation of my middle school classrooms reveal….that for the past many years…..at least 10% of my enrollment in any given class professes to be transgender these days. That means about 3-4 per class in a 5 period day….and ALL of them are girls who believe they are supposed to be boys. I’ve been called to the admin office for calling out their given and registered names on my roll sheets at the beginning of school when I didn’t know anyone….for NOT calling out “Jake” for the “Jane” on my roll sheet….as THO’ I am a mind reader. (AND, BTW…as I’ve stated on this site before—I am supposed to keep this a secret from the parents!!! BY CA LAW!!!)). In ALL my years of teaching, it has ever been thus….NO boys who want to identify as girls. I’ve, for sure, had a few boys who, early on, identified as gay men and confided in me…..but they did not want to transgender into being female. Now, after this year and a half of distance “zoom” learning, where I suspect kids were not really attending, but spending their days on the internet in chat rooms and whatever…even gay and transgender porn….for a year…..and now, the little girls are coming back to school professing to be transgender boys and I have to call them Zack and Sam and Jake and so on……The thing is….as a teacher….I recognize the hallmarks of a traditionally female middle-schooler in most of these girls’ behaviors….the hilarious giggling at nothing, the need for attention through being too loud, too coy, too flirtatious….and I’m thinking to myself (annoyed as a teacher trying to keep order in the classroom), “THIS is NOT the behavior of a middle school BOY…this is the behavior of a middle school GIRL. What is happening to us? If you have an idea or explanation, please let me in on it. Historically, this began with the “reign” of Barack Hussein Obama….I invite you all to look at the literature prior to his “reign” in the WhiteHouse…..and you won’t see a record of this onslaught of transgender middle school girls from female to male until after his “rainbow” service as POTUS. And, BTW….all of this is imbedded into the “equity” mantra of CRT.

Has this happened in your district?
https://www.breitbart.com/politics/2021/11/16/florida-parents-sue-school-for-secretly-transitioning-13-year-old-daughter/

Thank you Dr.E for this important post. The elimination of God from our society has resulted in human beings declaring themselves as gods, wherein there cannot be any grasp of or love of Truth, who is a person, Our Lord Jesus Christ, “. . .I am the Way, the Truth and the Light…” It is a great tragedy that many individuals do not know Our Lord, Jesus, who is Love and Mercy itself.

Sad so much confusion in the younger folk.

They can’t really reject the biblical worldview since they are totally ignorant about it, except for propaganda against it

they would naturally withdraw into self centeredness and self reliance (of a sort) because they are mainly exposed to stupidity and badly run systems presented as brilliant by the imbecile MSM.

I feel so sad because to erase the history of our culture, schools, media, msm blocked the old common knowledge. Neither nursery rhymes, nor small words of wisdom:

With the excuse of gender equality, they destroyed shop class, and home ec to prevent acquiring common skills

We now have a generation of young teachers who were never taught, even by parents, such pieces of knowledge