Sunday Devotional: The Magi and the Christmas Star

When Jesus was born in Bethlehem of Judea,
in the days of King Herod,
behold, magi from the east arrived in Jerusalem, saying,
“Where is the newborn king of the Jews?
We saw his star at its rising
and have come to do him homage.”

And behold, the star that they had seen at its rising preceded them,
until it came and stopped over the place where the child was.
They were overjoyed at seeing the star,
and on entering the house
they saw the child with Mary his mother.
They prostrated themselves and did him homage.
Then they opened their treasures
and offered him gifts of gold, frankincense, and myrrh.
And having been warned in a dream not to return to Herod,
they departed for their country by another way. 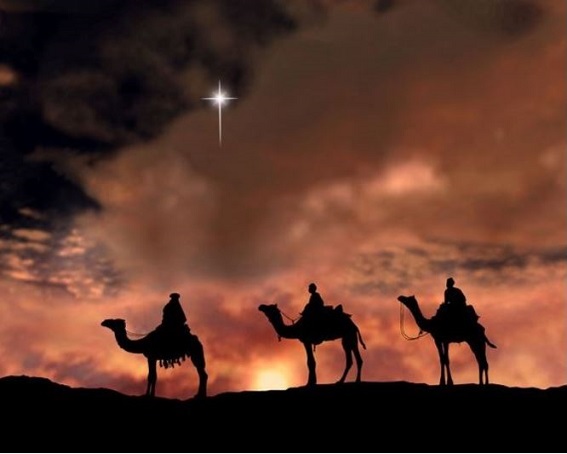 Today is the great feast of the Epiphany, which celebrates the adoration of Jesus by the Magi — an event that had been foretold in Isaiah 60:1-6 some 800 years before the birth of Christ.

Your light has come,
the glory of the Lord shines upon you….
Nations shall walk by your light,
and kings by your shining radiance.
Raise your eyes and look about;
they all gather and come to you….
Then…the wealth of nations shall be brought to you.
Caravans of camels shall fill you,
dromedaries from Midian and Ephah;
all from Sheba shall come
bearing gold and frankincense,
and proclaiming the praises of the Lord.

The Magi were wise men, non-Hebrew pagans from the East. Bearing gifts fit for a king — those of gold, frankincense, and myrrh — their coming to Jerusalem to pay homage to “the king of the Jews” shows that they sought, in the messianic light of the Christmas star, the one who will be king of all nations.

It is noteworthy that the first creatures to see the newborn Jesus were his human parents, Mary and Joseph; angels on high; humble farm animals; lowly shepherds; and Gentiles — the Magi.

The Epiphany, therefore, signifies the manifestation of Jesus as Son of God and Savior of the world, not just the Old Testament‘s oft-prophesied messiah of the Jews. God is not a tribal deity, exclusive to only the so-called “chosen people”. Jesus the Christ came for Jews and Gentiles. He came for all of us, no matter our race, gender, language, country, or creed.

As St. Paul wrote in his letter to the Ephesians 3:6:

[T]he Gentiles are coheirs,
members of the same body,
and copartners in the promise
in Christ Jesus through the gospel.

And having been warned in a dream
not to return to Herod,
they departed for their country
by another way.

By the way, astronomers, using software programs reproducing the night sky exactly as it was thousands of years ago, have determined there really was a Christmas Star or Star of Bethlehem — another empirical or scientific confirmation of biblical accounts. David Reneke, news editor of Australia’s Sky and Space Magazine, said: “We found out something startling. It looks like the ‘Christmas star’ really did exist.”

It’s generally accepted by most researchers that Christ was born between 3 BC and 1 AD. On 12 August, 3 BC, Jupiter and Venus appeared very close together just before sunrise, appearing as bright morning stars. It would have been visible in the eastern dawn sky of the Middle East from about 3:45 to 5:20 a.m.

But it didn’t stop there. The crowning touch came ten months later, on 17 June 2 BC, Venus and Jupiter joined up again in the constellation Leo. This time the two planets were so close that, without the use of our modern telescopes and other optical aids, they would have looked like one single, brilliant star.

How appropriate that these heavenly bodies were pointing to the birth of Jesus the Christ — the King of kings, Lord of lords, the salvific God of love who became human in order to suffer and die for our redemption.

Did you know that last year on December 21, the Christmas star reappeared when the two largest planets in our solar system, Jupiter and Saturn, seemed to almost merge in Earth’s night sky, just 0.1 degrees apart or a mere one-fifth the width of the Moon. The two planets were closer than they were in almost 800 years, since 1226 A.D., when Genghis Khan was conquering large swaths of Asia, and Europe was still generations away from the Renaissance. (Astronomy)

The next Great Conjunction of Jupiter and Saturn will occur in 2080, 58 years from now.

Below is a picture of the 2020 Christmas star viewed from Jerusalem looking toward Bethlehem (source: Earl Tucker Dickerson):

For other passages in the Old Testament foretelling the incarnation of the Second Person of the Triune Godhead, see my post “Sunday Devotional: He shall be peace“.

May the joy of the Epiphany and the peace and love of Jesus Christ, the King of Kings, be with you!