Sunday Devotional: I will come to you 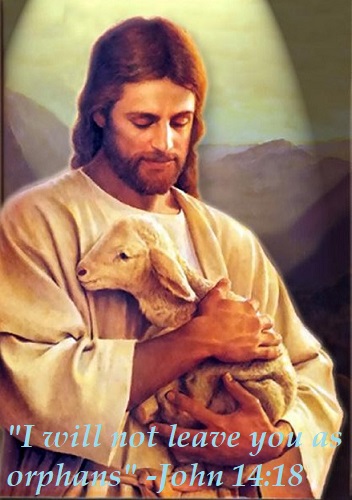 Three Sundays ago, the universal Church remembered our Lord Jesus Christ’s Ascension, when He left this mortal world, not to return until the End Days. In leaving, our Lord bade a last farewell to His faithful disciples and, knowing full well how bereft they would be, He made sure we are not abandoned. He promised that although “the world will not see me anymore . . . I will not leave you as orphans” (John 14:19, 18).

Jesus made two promises to ensure we would not be left “as orphans”:

(1) The Father will send the Holy Spirit, the Third Person of the Triune Godhead. As Jesus said:

“And I will ask the Father,
and He will give you another advocate
to help you and be with you forever —
the Spirit of truth.
The world cannot accept Him,
because it neither sees Him nor knows Him.
But you know Him,
for He lives with you
and will be in you.”

“I will not leave you as orphans;
I will come to you.”

How thoughtful and loving our Lord is!

Brothers and sisters:
I received from the Lord what I also handed on to you,
that the Lord Jesus, on the night he was handed over,
took bread, and, after he had given thanks,
broke it and said, “This is my body that is for you.
Do this in remembrance of me.”
In the same way also the cup, after supper, saying,
“This cup is the new covenant in my blood.
Do this, as often as you drink it, in remembrance of me.”
For as often as you eat this bread and drink the cup,
you proclaim the death of the Lord until he comes.

Today, the universal Church celebrates the Solemnity of the Most Holy Body and Blood of Christ, when we remember and celebrate the new Covenant that our Lord made with His Body and Blood, with all who believe in Him. In so doing, Jesus transformed the tribal religion of Judaism into a universal faith. As St. Paul said in his letter to the Hebrews 8:13:

In speaking of a new covenant,
He makes the first one obsolete.
And what is becoming obsolete and growing old
is ready to vanish away.

Do you doubt His words?

Have you heard of the Lanciano Eucharistic miracle?

20 years ago, my Godsister joandarc and I went on a pilgrimage to Italy.

Among the places we visited were the wondrous Sanctuary of St. Michael the Archangel in Mount Gargano and the Church of San Francesco in Lanciano. In the latter was a glass case containing a brownish substance.

Church of San Francesco, Lanciano, aka Shrine of the Eucharistic Miracle

As described by TheRealPresence.org, during the middle of the 8th century, a Basilian monk doubted the Real Presence in the Eucharist — that at consecration, bread and wine become Christ’s true body and true blood.

The doubting monk was celebrating Mass one day. As he intoned the words of consecration, “suddenly the monk saw bread turn into Flesh and the wine into Blood,” according to documents at the Sanctuary of the Eucharistic Miracle in Lanciano, Italy.

Today, more than 12 centuries after the Lanciano miracle, the transformed host and wine are preserved still, despite being exposed to atmospheric and biological agents:

Scientific investigations of Lanciano were conducted since 1575, most notably in 1970-71 and taken up again partly in 1981, by Dr. Odoardo Linoli, head of the clinical analysis laboratory and of pathological anatomy at Arezzo Hospital, and Dr. Ruggero Bertelli, professor of anatomy at the University of Siena.

Linoli and Bertelli came to the following conclusions:

According to “The True Presence,” in 1973, the UN World Health Organization’s board of governors appointed a scientific commission to investigate Lanciano. After 500 examinations, the scientists verified the 1971 findings and declared the tissue to be human.

There have been other Eucharistic miracles elsewhere since Lanciano. See here, here, and especially the website “The Eucharistic Miracles of the World” that was the work of a devout Italian boy named Carlo Acutis before he died from a brain tumor in 2006 at the tender age of 15.

To conclude, Christ is with us through the Holy Spirit, and in His Body and Blood, which makes it all the more terrible and reprehensible that state governments, ostensibly to “contain” the COVID-19 “pandemic,” had barred Catholics and other Christians from attending church service, including the receiving of the Holy Eucharist, which is life itself.

Tell our Lord your troubles and fears.

And tell Him, often and always, that you love Him with your whole heart, your whole soul, your whole mind, and with all your strength. ❤️