Christians are going extinct in Jerusalem, attacked by radical Jews

In an essay in The Telegraph, Dec. 18, 2021, Francesco Patton, the leader of the Franciscan Friars in the Holy Land and throughout the Middle East, dolefully writes that Christians are on the verge of extinction in Jerusalem:

[O]nce we numbered 20 per cent of the population of Jerusalem, today the Christian community counts for less than 2 per cent.

In recent years, the lives of many Christians have been made unbearable by radical local groups with extremist ideologies. It seems that their aim is to free the Old City of Jerusalem from its Christian presence, even the Christian quarter. In the last years we suffered because of the desecration of our holy sites, the vandalization of our churches, offences against our priests, monks and worshippers. The frequency of these hate crimes leaves families and communities who have lived here for generations feeling unwelcome in their own homes.

But Patton does not identify who the “radical local groups with extremist ideologies” are.

But Patton provides a clue when he writes that “These radical groups do not represent the government or the people of Israel.”

A couple of alert Telegraph readers point us to these little-known and -publicized news reports:

The Israeli government is not just limpid in its response to the attacks by radical Jewish groups against Christians, the government indirectly encourages the attacks via the 2018 Nation State Law.

The Nation State Law states that although non-Jews (including Christians and Arabs) “are no less citizens of this country than our Jewish brothers and sisters,” “According to this law, the State of Israel has legislated that the people whose ‘welfare and safety’ it is most concerned to promote and protect are limited to the Jewish citizens of the State of Israel.”

Doesn’t this send a message to Jewish extremists that the Israeli government will not promote and protect the welfare and safety of Christians?

Meanwhile, the response from Pope Francis is the sound of crickets. 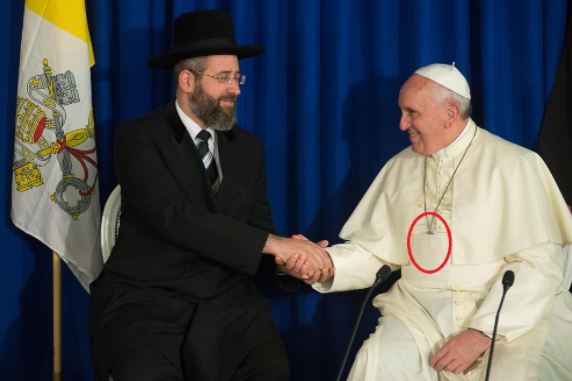 Pope Francis hides the Crucifix in his waist sash so as not to offend Israeli rabbis.