Are we being prepared for U.S. government disclosure on UFOs?

Niall McCarthy reports for Statista, May 20, 2021, that according to the National UFO Reporting Center in the United States, which documents sightings of UFOs all over the world, sightings have become more numerous.

While there was a dip in reported sightings in 2018, there were more than 6,000 in 2019 and over 7,000 in 2020. So far in 2021, there have been close to a thousand up to the middle of May. While such numbers might have previously been ignored, encounters with UFOs involving radar tracking and advanced sensor imagery from experienced and trustworthy pilots are lending them more credibility. 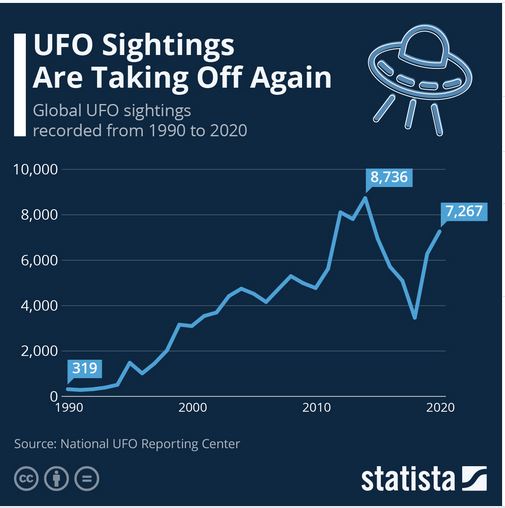 Mindy Weisberger reports for Live Science that on May 14, 2021, Jeremy Corbell, a filmmaker who produces documentaries about UFOs, posted the footage on his website, Instagram and YouTube, of a spherical object hovering in midair, moving side to side, then diving into the ocean.

In the clip, which appears to have been shot off a monitor and has several edits, a dark, round blob sits above the horizon. Male voices are audible in the footage; one says “took off, bookin’ it,” as the object moves horizontally in the screen’s crosshairs. When the UFO appears to dive into the water, one of the off-screen voices says, “Whoa, it splashed!” as the UFO disappears.

According to Corbell, “the US Navy photographed and filmed ‘spherical’ shaped UFOs and advanced transmedium vehicles” — craft that can travel through air and water.

The footage of the spherical UFO was filmed on July 15, 2019, at approximately 11 p.m. PDT, from within the USS Omaha’s Combat Information Center, near the coast of San Diego, CA. Radar images of the UFO show a solid ball, measuring about 6 feet (2 meters) in diameter, flying at speeds of 46 to 158 mph (74 to 254 km/h) for over an hour, culminating with the sphere vanishing beneath the waves. No wreckage was found at the location where the object went down.

Corbell wrote: “A submarine was used in the search and recovered nothing. We do not know what, if anything, the Navy or Pentagon might be willing to say about the USS Omaha incident, but we are confident the incident is a legitimate mystery and look forward to whatever information might be forthcoming.”

The Debrief reported on May 14 that Pentagon spokesperson Susan Gough confirmed that U.S. Navy personnel did capture the footage that Corbell posted, but would not disclose where and when it was filmed. She said the footage was included in “ongoing examinations” by the Unidentified Aerial Phenomena Task Force (UAPTF), a U.S. Office of Naval Intelligence program that investigates reports of unexplained aerial vehicles.

Corbell wrote that the footage is not classified, and stills of the spherical UFO were previously included in a UAPTF intelligence briefing from May 1.

The release of U.S. Navy footage of the spherical UFO is just the beginning of what appears to be the long-awaited “disclosure” of UFOs by the U.S. government.

On The Black Vault website, John Greenwald Jr. has archived more than 2,700 pages of the CIA’s once-secret UFO records since the 1980s, now declassified and obtained through the Freedom of Information Act.

Sometime this month U.S. intelligence services are set to deliver a groundbreaking report on “unidentified aerial phenomena” to Congress, at a time when close encounters between UFOs and U.S. Navy fighter jets are sending chills through America. Compiled by the secretary of defense and the director of national intelligence, the report is set to declassify Pentagon knowledge about unexplained aerial objects.

Nick Pope, a former UFO investigator for the UK’s Ministry of Defense, told The Sun Online the world may never know why the Pentagon has done a U-turn after decades of denial on unidentified phenomena.

US intelligence services officially closed the book on the controversial issue in 1969 at the conclusion Project Blue Book – which stated there was nothing to see regarding UFOs.

However, in the last three years there has been an abrupt turnaround as the Pentagon took the unprecedented steps of releasing three stunning UFO videos filmed by the US Navy.

And it also confirmed the existence of its secretive UFO investigation unit, before the Senate then commissioned a report on the issue from US intelligence which is due for release [in June]….

British defence officials continue to deny everything about any existence of investigations into the UFO issue or that they are sitting on any unreleased files.

So why are the Americans suddenly opening up this highly controversial and historically stigmatising topic?

Pope told The Sun Online he believes hidden forces are at work behind closed doors: “That is the $64,000 question – for years the US government had been like the UK is now on this issue, very defensive with a policy usually of denial, debunking and commenting as little as possible. And now in the last three and a half years, that policy has been flipped 180 degrees…. Something is playing out right now, powerful forces are at work behind the scenes, pulling the strings on this.” 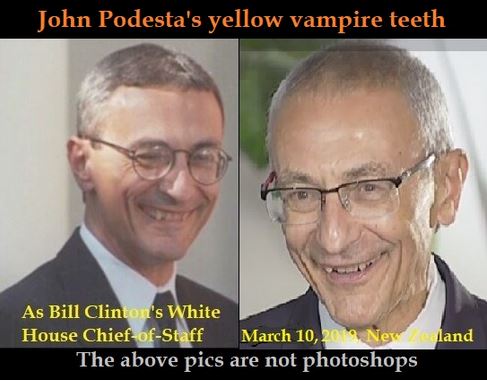 The Telegraph (UK) reports that senior White House officials have been briefed on the findings of the Pentagon UFO report that is due to be released to Congress later this month. According to these officials, the report will say that: