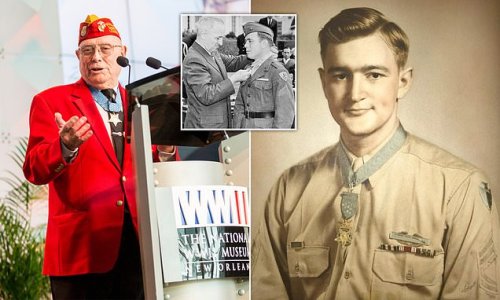 Thank you for your service, Woody. RIP soldier.

“The last living Medal of Honor recipient from World War II — a hero who fought enemy forces with a flamethrower in Iwo Jima — died Wednesday morning in West Virginia. He was 98.

Hershel “Woody” Williams, a former Marine corporal who earned the military’s highest decoration for his bravery in the Battle of Iwo Jima, died peacefully at a veterans medical center, according to The Woody Williams Foundation.

“Today at 3:15 a.m., Hershel Woodrow Williams, affectionately known by many as Woody went home to be with the Lord. Woody peacefully joined his beloved wife Ruby while surrounded by his family at the VA Medical Center which bears his name,” the foundation said in a statement.

Williams was awarded the Medal of Honor after he used a flamethrower and explosives to clear seven concrete bunkers known as pillboxes while under heavy machine gunfire in February 1945.

As all of the men in Williams’ company perished, he kept pushing forward — at one point shoving a flamethrower nozzle into one of the small concrete boxes and killing the enemies inside.

He then refueled his weapon and boldly returned five more times to destroy the remaining pillboxes.

The war hero later said he remembered little from that fateful day and that his mind was “just a blank.”

True Hero’s were Dog Tags not capes and will stand in the gap when the enemy knocks at the door.
Thank you DCG for posting this.