Sunday Devotional: Beware of scribes who go around in long robes

In the course of his teaching Jesus said to the crowds,
“Beware of the scribes, who like to go around in long robes
and accept greetings in the marketplaces,
seats of honor in synagogues,
and places of honor at banquets.
They devour the houses of widows and, as a pretext
recite lengthy prayers.
They will receive a very severe condemnation.”

The Second Person of the Triune Godhead is the epitome of humility.

He was born not in a palace, but in a lowly manger, surrounded by livestock. He was a manual laborer, a carpenter, by occupation. (Contrast that with our elite class’ disdain for manual labor, for which they employ illegal aliens.) In His three years of public ministry, thousands of people flocked to see and hear Him speak, some trekking for miles on foot.

But Jesus remained humble: He did not garb Himself in fancy robes, nor did He take seats and places of honor in synagogues and banquets. On what Christians now celebrate as Palm Sunday, He entered Jerusalem riding on a mule, before adoring crowds who spread their cloaks on the road, proclaiming Him their king (Luke 19). 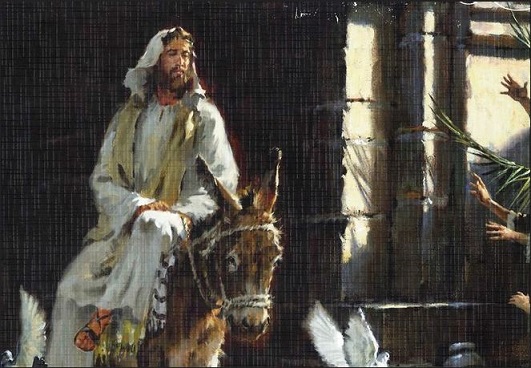 Contrast Jesus’ humility with the “scribes” of His time — those of high authority and influence who held important offices in public affairs. Among them were the Pharisees and Levites, with their “long robes” occupying seats of honor.

Contrast Jesus’ humility with the pomp and circumstance of church clergy today.

I am reminded of the trenchant observation by the late psychiatrist, M. Scott Peck, M.D. In his book, People of the Lie: The Hope for Healing Human Evil, Peck warned that evil people conceal themselves, especially by camouflaging themselves as benevolent people in institutions dedicated to the public good, such as churches, synagogues, temples and, I would add, governments. Dr. Peck wrote (p. 76, footnote):

Since the primary motive of the evil is disguise, one of the places evil people are most likely to be found is within the church. What better way to conceal one’s evil from oneself, as well as from others, than to be a deacon or some other highly visible form of Christian within our culture? by camouflaging themselves as good.

About the video: On Dec. 31, 2019, as reported by Fox News, “A visibly annoyed Pope Francis slapped away a woman’s hand and pulled himself away from her while greeting a crowd in St. Peter’s Square.” You can hear in the video that the woman was begging the pope, “Help me.”

In a study in 2018, “Psychopathy by U.S. State,” Murphy devised a measure to estimate the level of psychopathy for occupations and for each of the contiguous 48 U.S. states and the District of Columbia. Murphy found that the “most disproportionately psychopathic” occupations are CEO, lawyer, media, salesperson, surgeon, journalist, police officer, clergyperson, chef, and civil servant (or politician), and that Washington, D.C., with its concentration of politicians and government workers, was the most psychopathic.

The hypocrites hiding in churches and governments should heed Jesus’ warning to them in Mark 12:40:

“They will receive a very severe condemnation.”

In a time of universal deceit……
I have never forgotten your headline from Orwell.
In times such as these.
Hope you are doing well Doc.

FOTM will return, when the coast is clear and the time is right. 🙂

Looking forward to the return of FOTM, Dr. E, now that I hear that’s an option (and hoping to live that long–however short or long that may be, the way things are going in this mundane realm…)! But in the meantime, glad to have Body and Soul, that’s for sure. Thank you for all your dedication and hard work.

Fabulous Sunday Devotional! Certainly a word of warning to at least be aware of those who may well be hiding among our churches, which they are not on the Lord’s errand. God Bless you Dr E for never failing to edify us.

It would seem to me that a rather large number of people in the Political field are hidden figures of Evil. Fortunately,in the last couple of years,we’re seeing a strong infusion of actual GOOD Political Candidates who are coming forward to help save America from the Evil-Doers who are attempting to make a Global Communist future prevalent in America.

Where are my friends?
The landscape is dry and desolate.
They have stretched my shredded body
On this humiliating tree.

The hands that healed
And the feet that brought good news
They have pierced
With their fierce hatred.

The man-made whip
That opened up my back
Preaches from a proper pulpit.
They sit in comfort:
That vacant-eyed congregation.
The respected, demon-possessed reverend
Forks his tongue
Scratching itchy ears
While Cain bludgeons
Abel into silence.

My flesh in tattered pieces
Clots red and cold and sticks
To the rough-hewn timber
That props up my limp, vertical carcase
Between heaven and earth.
My life drips and puddles
Below my feet,
As I gaze down dizzily
On merciless eyes and dagger teeth.

The chapter-and-versed wolves
Jeer and taunt me.
Their sheepwool clothing
Is stained black with the furious violence
Of their heart of stone.
They worship me in lip service,
But I confess,
I never knew them
(Though they are my creation).

My tongue tastes like ashes:
It sticks to the roof of my mouth.
I am so thirsty.
This famine is too much for me.
The bulls of Bashan have bled me white.
Papa, into your hands
I commend my Spirit.

Genesis 49: 10: “The scepter shall not depart from Judah, nor a lawgiver from between his feet until Shiloh come; and unto him shall the gathering of the people be.”