Sunday Devotional: The Importance of the Baptism of Our Lord

The people were filled with expectation,
and all were asking in their hearts
whether John might be the Christ.
John answered them all, saying,
“I am baptizing you with water,
but one mightier than I is coming.
I am not worthy to loosen the thongs of his sandals.
He will baptize you with the Holy Spirit and fire.”

After all the people had been baptized
and Jesus also had been baptized and was praying,
heaven was opened and the Holy Spirit descended upon him
in bodily form like a dove.
And a voice came from heaven,
“You are my beloved Son;
with you I am well pleased.” 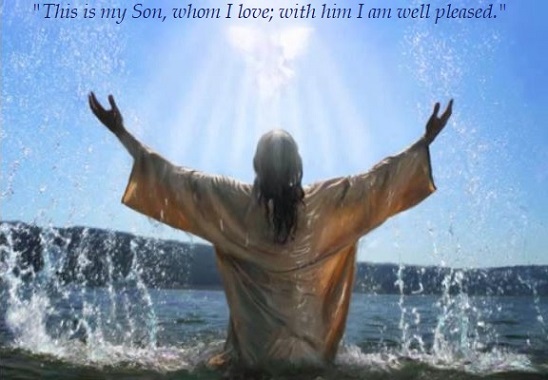 The account of Jesus’ baptism is significant for at least two reasons:

(1) The Baptism of our Lord by St. John the Baptist is one of several instances in the Old and New Testaments  (see also Genesis 1:26, John 5:7, and Matthew 28) when the nature of the Triune Godhead is revealed as the confounding mystery of three Persons in one God, which our greatest theologians had sought in vain to plumb.

We cannot come to the knowledge of the Trinity by reason alone, that is, by the natural and unaided efforts of the human mind. By our natural reason, we can know that God exists; that he is the First Cause of all; that he is one, infinite, simple, immutable, etc. But that the one God subsists in three really distinct Persons is a truth that can be known only by supernatural means. That is a truth beyond the reach of human reason to know, to prove, or to disprove. We know this truth by divine revelation, and accept it by supernatural faith; we take it upon the authority of God himself.… By aid of the light of glory the soul in heaven sees God himself clearly and truly.

And so we accept our human limitation and believe, putting our trust in the words of St. Paul that we shall understand fully when we see God face to face:

When I was a child, I spoke like a child,
I thought like a child, I reasoned like a child;
when I became a man, I gave up childish ways.
For now we see in a mirror dimly,
but then face to face.
Now I know in part;
then I shall understand fully,
even as I have been fully understood.

(2) Luke 3’s account also speaks to the importance that Jesus holds for Baptism. Though a sacrament meant for sinful humanity, the sinless Son of God chose to be baptized before He began His public ministry.

These are St. Paul’s words on Baptism:

“Do you not know that all of us who have been baptized into Christ Jesus were baptized into his death? We were buried therefore with him by baptism into death, so that as Christ was raised from the dead by the glory of the Father, we too might walk in newness of life.” -Romans 6:3-4

“But you were washed, you were sanctified, you were justified in the name of the Lord Jesus Christ and by the Spirit of our God.” -1 Corinthians 6:11

“For all of you who were baptized into Christ have clothed yourselves with Christ.” -Galatians 3:27

Baptism purifies and sanctifies (makes holy) the person, making him/her a dwelling of the Holy Spirit. That means that without Baptism, a person is without the Holy Spirit and rendered defenseless against the evil one.

I don’t know what other Christian denominations believe about baptism, but in the Catholic Church — notwithstanding its many flaws, including the terrible sins committed by its clergy — the sacrament of Baptism is an act of exorcism:

Since Baptism signifies liberation from sin and from its instigator the devil, one or more exorcisms are pronounced over the candidate. The celebrant then anoints him with the oil of catechumens, or lays his hands on him, and he explicitly renounces Satan. (#1237 of Catechism of the Catholic Church)

In this manner, through the exorcizing sacrament of Baptism, “all sins are forgiven, original sin and all personal sins, as well as all punishment for sin. In those who have been reborn nothing remains that would impede their entry into the Kingdom of God, neither Adam’s sin, nor personal sin, nor the consequences of sin, the gravest of which is separation from God.”

Moreover, through Baptism we receive the gift of grace from the Holy Trinity — to believe in God, to love Him, and to grow in goodness. In other words, the whole organism of the Christian’s supernatural life has its roots in Baptism.

So if you are a Christian, don’t make the mistake of postponing the baptism of your child(ren) like a friend of mine who, although he is a non-denomination Protestant and thinks of himself as quite devout, married a shallow woman with no religious beliefs. He spoke of the marriage as a mistake. They produced a daughter, now 30 years old with degrees in art and animation, and still living with her parents. My friend neither had his daughter baptized nor brought her to church services. When I asked him why, he said he wanted to leave it up to her to decide for herself when she’s an adult.

But in so doing, my friend rendered his daughter defenseless against the rampant dark forces of popular culture. Evidence of that contamination includes disturbing images she drew and posted to Instagram, including that of a goat’s head (or Baphomet) that she named “Menace of the goat king”, and a drawing for her business card of a demonic girl (herself) with two skulls.

Baptism — clothing your child “with Christ” — is the most important thing you can and will ever do for your child.

May the peace and love of our Lord Jesus Christ be with you,

Valentine’s Day and the meaning of true love

Today is Valentine’s Day — the day when TV commercials nag men to buy roses, candy, and jewelry for their wives or girl friends.

But did you know that the day is named after a real person, St. Valentine?

At least three different Saint Valentines, all of them martyrs, are mentioned in the early martyrologies under the date of February 14th. But the man for whom Valentine’s Day is named most likely was a priest at Rome who, in the second half of the 3rd century, was arrested and killed by the Emperor Claudius for secretly marrying Christian couples during a time of persecution in the Church. Legend has it that while he was imprisoned and waiting for his martyrdom, he sent letters to his fellow Christians signing them, “From Your Valentine.”

The popular customs associated with Valentine’s Day probably came from a conventional belief in England and France during the Middle Ages, that on 14 February, i.e. half way through the second month of the year, the birds began to pair. Thus in Chaucer’s Parliament of Foules we read:

For this was sent on Seynt Valentyne’s day
Whan every foul cometh ther to choose his mate.

For this reason the day was looked upon as specially consecrated to lovers and as a proper occasion for writing love letters and sending lovers’ tokens. [Source: Catholic Encyclopedia]

So what is love?

I can find no better definition and description of true love than the words of St. Paul:

And here’s the true meaning of Valentine’s Day:

The Greatest Commandment of all is to love God with your whole heart, your whole mind, your whole soul, and with all your strength; and to love your neighbor as you love yourself.

May the love of our Lord Jesus Christ be with you today!