Pneumonia is the leading cause of infection-related deaths in the United States, with potential for severe complications such as respiratory failure and sepsis. (CDC) 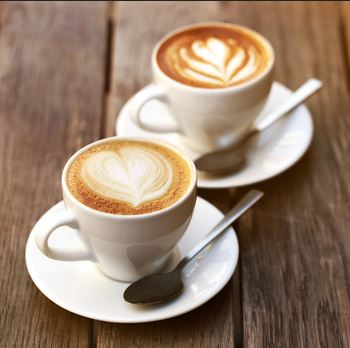 From 2009 to 2014, a team of 13 Japanese scientists, led by Kyoko Kondo of Osaka City University Hospital, sought to find if there’s an association between coffee and green tea intake and pneumonia among the elderly.

The team undertook a matched case–control study of 65 years or older patients who were newly diagnosed with pneumonia by a physician at 24 hospitals in Japan. As a control, patients with the same sex and age who visited the same hospital around the same time for a disease other than pneumonia were selected.

No association was found between pneumonia and green tea consumption.

The scientists conclude that their study “suggested” there is “a preventive association between coffee intake over 2 cups per day and pneumonia in the elderly“:

Caffeine contained in coffee has arousal effect, inotropic effect, diuretic effect, and respiratory function improving effect, and theophylline of its metabolites, has bronchodilation, stimulation of respiratory center, and anti-inflammatory effect16. In addition, coffee components such as caffeine, chlorogenic acid, and trigonelline have been reported to have antibacterial activity17,18,19,20,21,22.

There are also some research reports on the association between coffee and intestinal flora. Mills CE and colleagues have tested in vitro that chlorogenic acid, a type of polyphenol abundant in coffee beans23, improves the balance of the gut flora24. In addition, arabinogalactan contained in coffee beans has an effect of growing specific bifidobacteria25, and bifidobacteria grown in the large intestine have a function of activating immune cells26. Because the intestinal flora changes with aging, for example the number of bifidobacteria that work well for the body reduce significantly after the age of sixty27, these coffee components may have a beneficial effect on the gut flora. The role of these components in coffee may have played a role in reducing the risk of pneumonia in the elderly seen in this study.

Also, a 2018 study by the National Cancer Institute and the National Institutes of Health found that drinking coffee is associated with a lower risk of early death. In fact, drinking up to seven cups every day could cut death rates by 16%. (Independent)

Very interesting article. My problem is that anytime I ingest anything containing caffeine–I end up with the worst stomach ache. I would think that perhaps for those among the elderly who can tolerate coffee–then it’s a real good deal.

I just looked this up online:

Coffee gives you stomach ache because it’s acidic and can irritate your stomach lining. Try less acidic coffee like French roast and espresso.

For many years,I drank coffee as my beverage of choice,because it was cheap and because I could find it almost anywhere. Now,I don’t drink as much of it,but I still go through 2-3 mugs (4-6 cups) per day. I’ve had Pneumonia twice in those years-once was “Walking Pneumonia”,from the work I was doing,(Milk and Pop Delivery,in and out of coolers every day),the other time was several years later,which the doctors wrote off as “Exhaustion,weak resistance”,which had me in the Hospital for 4 days before I was released. At that time I was diagnosed with Asthma and Emphysema. While I lived in Boise Idaho,I couldn’t afford health care,so I didn’t have access to breathing meds,so I drank coffee all day every day,and did fine. I’m still hareful of cold weather,and try not to go outside if it gets to Zero or below. Not sure if that makes a difference.

Thank you Dr.E for this fascinating post and the research that you evaluated and performed. Wow, I am going to drink more coffee, as I usually have only one cup a day. I used to drink a lot more. The stats were incredible! How helpful!