Horses can recognize their reflection in mirror

The ability of visual self-recognition, as in recognizing oneself in a reflection in mirror is a measurement of self-awareness — the experience of one’s own personality or individuality.

However, animals can be self-aware in ways not measured by the mirror test, such as distinguishing between their own and others’ songs and scents.

Phoebe Southworth reports for the UK Telegraph, March 27, 2021, that many primates, as well as elephants, bottlenose dolphins, magpies and a small fish called a cleaner wrasse have previously been found capable of recognizing their mirror reflection.

But a recent study led by Dr. Paolo Baragli of the University of Pisa in Italy, published in the journal Animal Cognition, found that horses, too, can recognize their reflection in a mirror and even preen themselves. 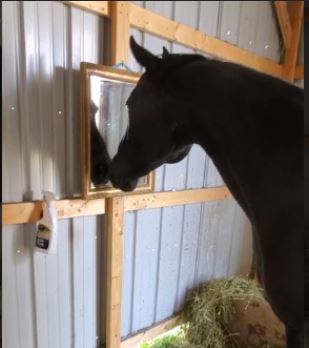 Dr. Baragli said: “They’re either trying to explore the mark on their face or trying to get it off. It’s hard to imagine there’s any other reason for this behavior.”

But some experts are skeptical of the findings and argue that the horses would never have investigated their reflection in the mirror if they hadn’t been prompted to do so. Gordon Gallup, a psychologist at the University at Albany in New York, said: “None of the horses spontaneously used the mirror to investigate parts of their bodies that could not be seen without a mirror.”

Dr. Baragli remains convinced the horses’ behavior shows they understand they are looking at themselves in the mirror, and that they can use the mirror to make modifications to their appearance. He believes this is an important first step in establishing whether all equines comprehend the concept of individuality and are conscious of how they look.

Telegraph readers, like the comment below, noted that horses must have seen and recognized their reflection in water when they bend down to drink:

Of course horses know their own reflection, they have been looking at themselves when drinking for aeons. The same goes for zebras, and countless other animals. They would startle if they saw the face of a lion behind the head of the horse in the water.

Other readers point out that research like this, hopefully, will make us humans be less cruel toward animals:

We have been underestimating the abilities and sensitivities of animals for ever. That is how we are able to enslave and mistreat them. Sooner or later, research like this is going to make us see that.

Good article, Dr. E-and I think ALL animals are smarter than we give them credit for.

A pig is smarter than a dog. A pig at slaughter-weight has the intelligence and reasonability of about a 3-year old human. At just a little beyond that, age 4, I was reading. This freaks me out. I haven’t yet given up bacon or Easter Ham–so much farm culture in my past, & darn, it’s so good…but it’s getting harder every year to justify. I have yet to study the wild/destructive boars in my region (they exist here, as well as many other regions in the USA…across various places in our country…). Would I feel differently about them, esp as a matter of control/environmental preservation? They are destructive to the natural environment b/c they were an introduced creature by Spaniards, & they rip up everything in front of them… and, they are dangerous to hunt, but it feels to me a more balanced proposition than raising a domestic pig to slaughter and eat. Still weighing all this…..

From what I’ve heard about wild boars here in OK, they are very destructive. Our state allows hunting to limit their growth as they damage crops and wildlife refuges and carry diseases.
We have a couple processors in town who won’t accept wild boars because they can carry so many bacterial diseases which can easily spread to humans/domestics. You’ve got to be very careful when cleaning wild boars, apparently.
Yet the meat is supposedly very good and even if the boar has a bacterial disease, the meat can be eaten if cooked to the proper temperature. I’m not into trying boar myself though!

What a fabulous article! There is no doubt but what when God created animals to populate this Earth–he gave them intelligence also.

Thank you Dr.E for this most interesting post. I believe that animals and birds, et al. are very intelligent and have souls. This has been shown to me throughout my life and constant experiences with them. They are also creatures without sin.

I believe animals are the purest living creatures on the earth. For me it started a long time ago when I read the book ‘Never Cry Wolf’.

Good thing I read the article; I thought it was about Joe Biden getting ready for one of his press conferences.