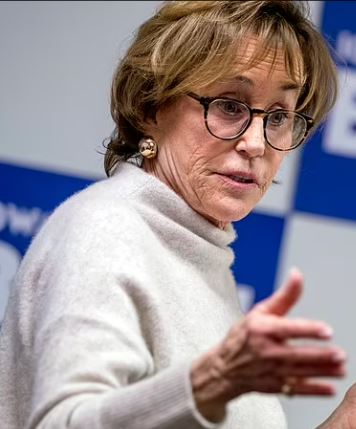 For 10 years, the Biden family have had a close relationship with Prince Harry and reports have claimed that Markle has been networking among senior Democrats with a view of building a campaign and starting a career in politics.

Owens commented: ‘It’s wonderful to have women in politics. The more women we have the better our democratic system will work. We welcome her to come in and join the Democratic Party.’

When asked if she thought the Duchess would make a good potential candidate for President one day, Owens told Good Morning Britain: ‘Yes, perhaps. Of course she will.’

Owens, who released her memoir ‘Growing Up Biden: A Memoir’ last month, also confirmed that Biden would run for President again in 2024 as she defended his gaffes as ‘truths’….

Critics have cited Biden’s cognitive decline as the main reason for the current administration’s backtracking over the president’s other recent verbal blunders….

Owens added: ‘Joe is the right person at the right time for the right job and there are lots of things still to do to carry on the agenda. There’s no daylight between the private person and the public man. The American people know what Joe is about.’ When asked if Biden will run for President in 2024, Owens confirmed: ‘Yes. We’ve got stuff to do. Absolutely.’

Owens was her brother’s campaign manager for all of his Senate campaigns and for his 2008 presidential bid, which he suspended only to be chosen as Democratic nominee Barack Obama’s running mate. She was a senior adviser on the president’s successful 2020 campaign. 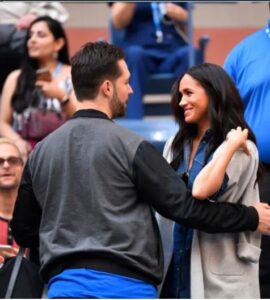 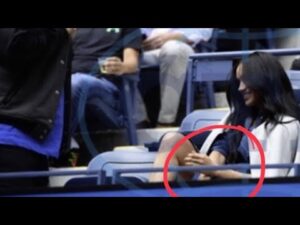 Meghan flashes her crotch at Ohanian.

They know Biden is POTUS in name only

Whether it’s because of Biden’s senile dementia or, as some maintain, the Joe Biden we are allowed to see is actually an imposter, Democrat elites clearly do not respect or even regard him as President of the United States of America.

If they did, they wouldn’t ignore him, as shown in this cringe-worthy video of Barack Obama’s visit to the White House on April 5, 2022.

Whatever the reason for their disregard of Biden, it raises the question: “Who really is in charge of the presidency?”

This is our 256th world-famous Caption Contest! 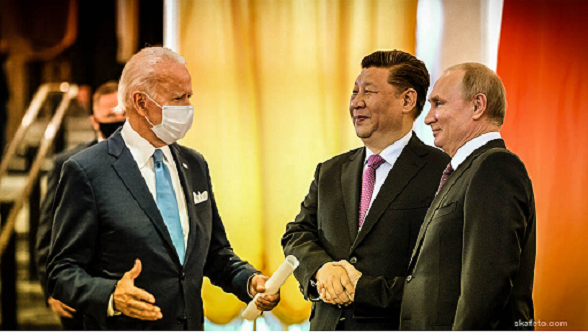 Xi to Putin: “Look at that old fool. He actually believes the mask can protect him from our Wuhan lab-engineered bio-weapon!”

Bloomberg: Eat lentils and let your pets die of cancer! 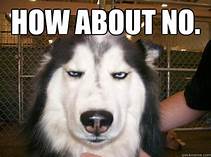 “Bloomberg raised eyebrows with an op-ed telling Americans earning less than $300,000 to eat less meat and cut back on chemotherapy for pets to beat spiraling inflation.

The business news outlet’s tweet that promoted the story also pointed out, ‘nobody said this would be fun,’ with scholar Teresa Ghilarducci’s article offering some very dark advice.

In the widely-mocked piece, headlined ‘Inflation Stings Most If You Earn Less Than $300k,’ Ghilarducci, a NYC-based labor and retirement expert, suggests switching to vegetables as a way of avoiding inflated meat prices.

‘Though your palate may not be used to it, tasty meat substitutes include vegetables (where prices are up a little over 4%, or lentils and beans, which are up about 9%),’ she writes. ‘Plan to cut out the middle creature and consume plants directly. It’s a more efficient, healthier and cheaper way to get calories.’

And for new pet owners, Ghilarducci advises ‘to rethink those costly pet medical needs’ by cutting back on cancer treatments for much loved furry-friends.

‘It may sound harsh,’ she lectured. ‘But researchers actually don’t recommend pet chemotherapy — which can cost up to $10,000 — for ethical reasons.’ 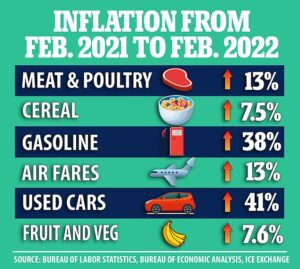 This list of how you can lower your standard of living goes on here.

How about switching to policies that avoid America becoming the next Venezuela?

This is our 254th world-famous Caption Contest!

So much strength being communicated here… pic.twitter.com/yfY5dCuEcm

About the video: On February 2, 2022, after a speech announcing plans to relaunch the White House’s “Cancer Moonshot” initiative, 79-year-old Joe Biden seemed to lose his way as he left the podium. He wandered in the wrong direction and had to be led off the stage by his wife, Jill. (The Blaze)

No worries, all you Biden voters. His finger is on the nuclear button!

For the winner of our last Caption Contest, click here.

This was a difficult contest for our voters because there were many really clever entries. 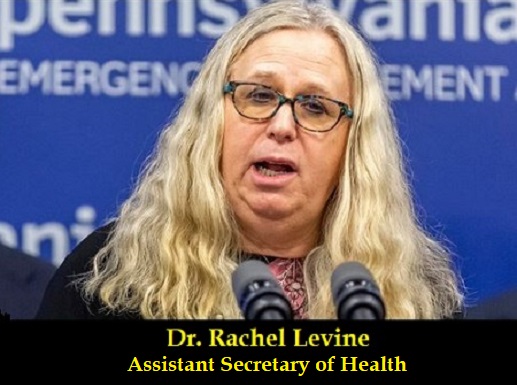 Jackie Puppet and MR B. are in second place, each with one #1 vote and 4 points:

Jackie Puppet: “Pediatrician?? He looks more like a pedophile-trician!”

MR B.: “I’m sure this ‘woman’s’ telling us the cure to COVID is a jar of Vaseline petroleum jelly.”

Calgirl, Christy, another Jackie Puppet caption, Jen, and Tim Shey are all in third place, each with one #2 vote and 2 points:

Calgirl: “Unfortunately, for male or female or anything in between, there is no surgical solution to fix UGLY.”

Jen: “A thing of beauty is a joy forever.”

Tim Shey: “This picture reminds me of a quote from the film BRAVEHEART (1995): ‘Whom do I send? Not my gentle son. The mere sight of him would only encourage an enemy to take over the whole country.’ – King Edward I “

For all the other caption entries, go here.

Be here this Tuesday for our next very exciting Caption Contest!

According to Buddhism, karma is supposed to work after death, but sometimes karma is visited on deserving people when they are still alive.

Joe Biden may have won the 2020 election (see a Brookings Institute analysis of judicial votes on 2020 election irregularities), but his presidency is, predictably,  an utter disaster.

That disaster is even being acknowledged by Democrat useful-idiot voters as  Biden’s poll numbers continue to plummet (NewsMax): 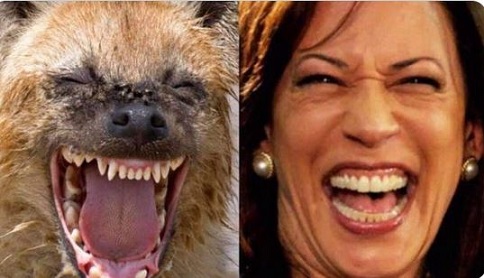 Not only has Kamala Harris been strangely MIA on her job, she is described as a “soul-destroying” “bully” by staffers, four of whom had quit in the space of two weeks, with more “eying the exit” (Daily Mail).

Vice President Kamala Harris is described as a “bully” in a new report that brands her as the “common denominator” behind a recent exodus of high-level staffers.

One former staffer claimed the vice president fails to read briefing materials, then lashes out at others when she’s unprepared.

“It’s clear that you’re not working with somebody who is willing to do the prep and the work,” the staffer said. “With Kamala you have to put up with a constant amount of soul-destroying criticism and also her own lack of confidence. So you’re constantly sort of propping up a bully, and it’s not really clear why.”

Oblivious to his own failings, Biden has grown hostile toward Harris and shows signs of dumping her as a VP running-mate for the 2024 election.

The New York Post reports that according to a CNN report, based on interviews with nearly three dozen insiders, Biden is “sidelining” Harris “amid growing tensions” and that the two have a dysfunctional relationship that has reached an “exhausted stalemate”.

At the funeral for Bob Dole at the U.S. Capitol last Thursday, behaving like immature high-schoolers, Biden did not acknowledge Harris as he walked past her. Both Biden and Harris did not make eye contact and averted their gaze. Then Biden asked his wife Jill to switch seats so he wouldn’t have to be next to Harris.

Are these fellas in fucking high school? https://t.co/3bOr7UIZWi

High Times in the Big Apple 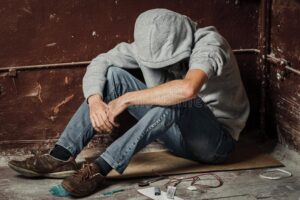 Lost in lethal dreams, a junkie destroys his life on a sidewalk.

NYC Mayor Bill de Blasio is opening the country’s first “supervised shooting galleries” for junkies, a measure he believes will help keep addicts from shooting up openly on the sidewalks of Manhattan as they now do routinely. His nonprofit-run “Overdose Prevention Centers” are located in East Harlem and Washington Heights, and are expected to open as early as Tuesday (Nov. 30).

The locations were chosen based on “health need and depth of program experience,” according to the NYC Health Department. The sites will provide clean needles and social services. Addicts have to bring their own dope.
According to de Blasio, the shooting galleries are a safe and effective way to address the opioid crisis. “I’m proud to show cities in this country that after decades of failure, a smarter approach is possible,” de Blasio said in a statement Tuesday.

The mayor had attempted to create drug shooting galleries prior to the election of Joe Biden to the presidency but was unsuccessful.
The mayor tried to push the controversial proposal to open a total of four sites before, but was blocked by Gov. Andrew Cuomo and President Donald Trump, who both opposed the plan.

“British Columbia has led North America in safe injection sites, all while crossing overdose death milestones every month. How anyone can see this as a solution to a serious problem is beyond me, never mind the concerns of the neighbors,” Borelli told The Post Tuesday.

Rep. Nicole Malliotakis (R-NY), whose district includes Staten Island and parts of southern Brooklyn, called on the Department of Justice to block the sites, noting that under former President Trump the DOJ said such sites would violate the federal Controlled Substances Act.

The congresswoman cited a Jan. 2021 Third Circuit Court of Appeals ruling that determined it was a federal crime for a supervised injection site run by a Philadelphia nonprofit to allow consumption of illegal drug use at its location.
“Instead of focusing on the root cause of the drug epidemic, Mayor de Blasio is enabling drug cartels that continue to break our laws, smuggle illegal drugs over our border, and prey on our children,” Malliotakis said.

“Crime and fentanyl use are at record highs because of open borders, botched bail reform, and anti-police policies that keep releasing criminal drug dealers back onto our streets. Opening taxpayer-funded heroin shooting galleries is not a proper solution. These centers not only encourage drug use but they will further deteriorate our quality of life,” she said.

Why are they blurring Joe Biden’s presidential seal?

Something strange is going on. 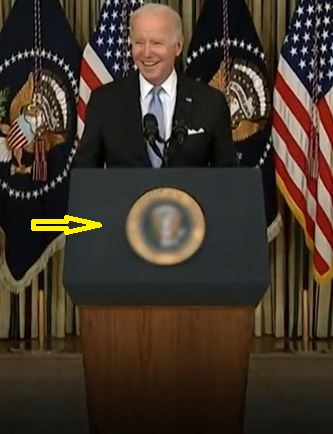 On November 6, 2021, Biden’s Twitter account (@JoeBiden) tweeted a video of Biden tooting the infrastructure bill in which the presidential seal on his podium is blurred:

I am so happy to say that it’s infrastructure week. pic.twitter.com/qoeyiCvegb

On November 15, 2021, the Democratic Party (@TheDemocrats) tweeted a video of Biden signing the infrastructure bill in which his presidential seal is, once again, blurred.

The next day, Nov. 16, @TheDemocrats tweeted a video of Biden signing an executive order in which, once again, his presidential seal is blurred. 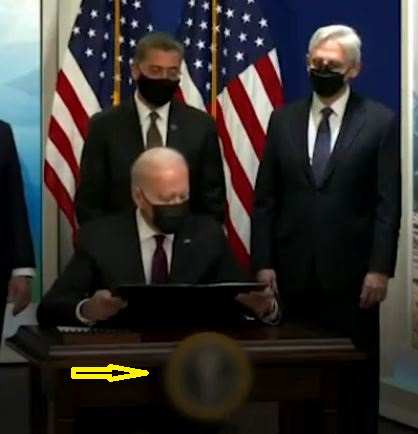 Addressing the crisis of violence against Native Americans is long overdue. Yesterday, President Biden took action to help bring it to an end. pic.twitter.com/RsJTunSNSx

Why are they doing this, and what is the covert message they’re sending?